« Where Are the Simulation Engineers? | Main | Dassault Threatens Siemens Over Customer List »

Chrome Doesn't Work -- For Me

I consider Opera to be the only mature Web browser, because it is so feature-rich. But due to its lack of marketshare, I sometimes have to fire up FireFox for certain Web sites or (heaven forbid!) that IE browser thrown in with Windows.

My first attempt to download Chrome failed, because Google wrote it to work only on the XP and Vista dialects of Windows -- and my desktop still runs the stable Windows 2000 OS. Who says Chrome is replacing the operating system?

After downloading it to my Vista-native HP notebook computer, Chrome offered to copy bookmarks from Firefox -- which, earlier, it had copied from Opera.

I was interested to see how much faster GMail and Google Docs would run in this wunderbrowser wihth its 80x faster V8 Javaengine, but nothing worked. Every Web site I visited displayed for a couple of seconds, and then Chrome's frowny-face folder icon blanked the site.

The same problem occurred for Engaget, GMail, Google Docs, CNN, and just about every other Web site I tried. The sole exception was Google Search. In the unPhotoShopped figure below, you can see the unhappy icon on every tab. 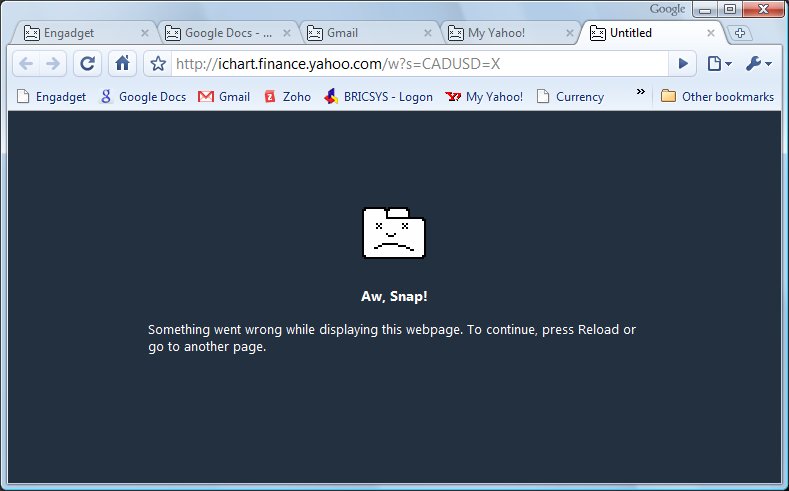