Some commenters are calling this law suit 'silly' (or worse; I've not posted some due to their extreme derogatory tone). Autodesk is within its rights to attempt to protect devices by which it is known -- logos, names, and even colors and shapes. You may disagree with that right, but the American courts permit it.

The reason? It's all about preventing the public from becoming confused, and then buying one product when they meant to buy another.

I recall DaimlerChrysler in a similar law suit. Its Jeep has a front grill made of seven vertical bars. They sued GM, because the Hummer also used seven vertical bars. Chrysler claimed they spent a billion dollars in marketing the Jeep's image. GM's defense: Chrysler was silent for ten years; this is the legal aspect tripping up Autodesk's 25-year-late claim to DWG.

GM then sued Avanti Motor because its Studebaker Xtreme Utility Vehicle looked too similar to the Hummer H2. (The two settled out of court, Avanti agreeing to change its design.) And on it goes.

So, ya, corporations go to huge lengths to protect their image from competitors. I don't resort to law suits, but I do watch for others (ab)using the name and products produced by upFront.eZine Publishing, Ltd.

Rock Solid Perspective writes about the law suit from a SolidWorks user perspective.

A commenter at that blog says the first few pages of the legal document read like Autodesk marketing material. It's not marketing; instead, Autodesk is stating its position among other corporations, creating the foundation upon which to make its claim for DWG.

SolidWorks likes to target AutoCAD users; indeed, Jason of Rock Solid Perspective is a former AutoCAD user. We have seen endless "come on over to us" magazine ads and software products aimed at AutoCAD users.

OTOH, Autodesk counter-targets; there was that satisfaction survey for SolidWorks users to tell Autodesk how much they dislike SolidWorks. "Has SolidWorks ever corrupted your files?" "What is your biggest frustration with SolidWorks in terms of product quality and performance?"

We recall pictures of Inventor taxi and airport ads at SolidWorks events. Gal Raz writes, "I took those pictures at the airport when I arrived for SolidWorks World in 2005." 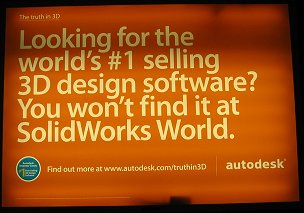 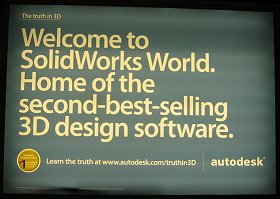 These pictures are three years old; today, SolidWorks apparently leads Inventor 840,000 to 819,000 -- according to the most recent numbers released by each company. (The www.autodesk.com/truthin3d page no longer exits.)

Ultimately, however, the law suit has nothing to do with confused customers or yellow rectangles. It's about Autodesk's uncontested ownership of DWG.

Here is a political question: What would be your reaction if it were SolidWorks who had first sued Autodesk? Examining your feelings over reversed roles is an interesting thought experiment, and can help tell you about yourself.

Thanks for the recognition Ralph.

I think this whole thing is a petty lawsuit. I personally think I would feel the same way if the roles were reversed. For goodness sake, its a file extension that they are fighting over.

Like I stated, the companies need to focus more on their products and less on this kind of garbage.

My reaction and comments would be the same if the reverse were true and with respect software licence terms and conditions I have reacted and commented to other companies in exactly the same way I have Autodesk.
What's interesting is how those companies reacted compared to the manner Autodesk has responded to my comments. That is also worth examining!
With one company, in three days, five e-mails and no lawyers more was achieved than has been achieved with Autodesk's 'head in sand' humans (management and lawyers) in nearly four years!

That's a significant difference and one customers measure and takes notice of.

Defending a reasonable position is one thing; choosing to take ownership - by making it appear your are defending your position - of something that belongs to the public (the letters DWG) should be roundly condemned, by all, no matter who does it.

Well sorry to say this, but I think that observation is unfair and descriminatory.

Please give one concrete example of a 600 pound gorilla market leader in the software sector who is not 'targeted' by every one of their competitors.

And besides, we all know that what this is *really* about, is that Autodesk is just so frazzled by those outstanding Dassault TV ads

The root issue here is that Autodesk would like to stop all use of its DWG file format without licensing its libraries, which entails unreasonable and completely unjustified fees, and requires the licensee to agree to quite unreasonable if not irrational terms (and I'd be willing to bet they were specially modified in the contract with Bently).

If you ask me, the root issue here is not a civil issue, it's an Anti Trust issue.

In GM (Hummer) vs Avanti (Studebaker), GM had little grounds, because Avanti had shown that many other trucks from several vendors were equally similar to the H2 in the same ways the XUV was, yet GM did nothing about them (presumably, because they were all products of larger competitors like Toyota and Ford, who could easily afford the cost of a legal defense).

The suit was settled because Avanti was a smaller competitor that could not afford the cost of litigation, and little more.

This makes no sense to me at all, especially as they have failed to copyright/ trade mark/ DWG.

Autodesk wants to be seen as a 'Good, Great and important company", so i have just been told. Autodesk should think about what this kind of action does to continue any negative perceptions amongst engineers, especially its own customers.

paraphrasing your car example, there are a lot of vendors using the DWG logo and even the format itself in their software without getting sued, like Bricsys (BricsCAD, ODA-libs) and Corel (Designer X4, ODA-libs, poorly implemented though). So the judges should turn that one down too.

Working for a BricsCAD 8 review I opened one of my AutoCAD drawings inclusive lots of layers, linetypes, associative hatching and dimensioning in BC, worked at it for an hour, saved it, and re-opened it in AutoCAD: The TrustedDWG alert was the single and only issue here, nothing was lost, nothing was garbled up. So rest assured: ODA is a major pain in the ... of Autodesk.

Considering that Bricsys also strives for -- and gets exceedingly successful in -- achieving compatibility between Autodesk ARX and BC BRX, this would enable one to develop application sourcecode for the AutoCAD API ($$$) inside of the BricsCAD API (free), thus DWG compatibility leading to also crunching away at the profitable developer business, I can only think of the ODA as being the primary target of Autodesk lawyers.

Now SolidWorks also is a member of ODA. Looking at the format exchange between Autodesk and ODA-member Bentley, thus taking away one of ODA's most reputable members, this lawsuit looks like another piece in the "Let's-crush-ODA" mosaic to me.

I've used AutoCAD throughout the ninties. The one thing that always struck me is the fact that DWG was unprotected. I even quickly thought about attempting to trademark it myself at one time.

If one of my sources is correct, DWG is actually a registered trademark in other countries, and guess who isn't the owner. I got a little more of this to say on my site.