There were eight editors at the Oce press event, and this is the hardware they used for taking notes:

Out of date? Sign of the times? Rage against the Microsoft monopoly? Personal preference based on experience?

This was the first trip on which I relied on the popular Linux-based mini-notebook. It worked well, connecting to the hotel's wired Internet and the wireless Internet available near the Oce office. Email, Web access, note taking, article writing, PDF viewing, Picassa photo processing, ebook sending, movie watching -- everything I need to do on business trips worked on the diminutive machine. Even viewing the PowerPoints provided by Oce was flawless with the OpenOffice software. My fingers quickly adjusted to the small keyboard.

(Only drawback: the spare battery I ordered from Hong Kong arrived the day after I returned from this trip to Chicago, and so I was limited to working just two hours during my four-hour flight. The lack of a CD/DVD drive posed no problem on this trip, since I had ripped movies to a 16GB USB key.)

I asked the other Asus user why he got one: the small size and weight were crucial to him. He bought the cheapest 2G model ($300 or less), because he figures these devices will just keep improving, and then he'll get a better one. 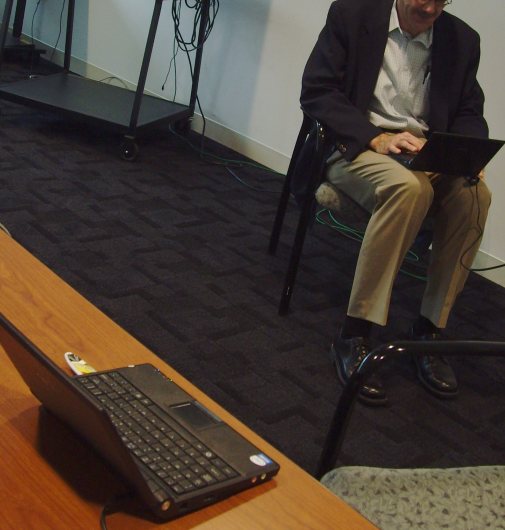 Above: Two Asus Eee mini-notebooks at one press event.

My next trip is to the SolidWorks event in Barcelona in mid-September, and there will be large contingent of editors and bloggers. I know there'll be more Mac users in attendence; it'll be interesting to see what other computers will be hauled along for the long trip.

One other significant change over the years: PalmPilots and their Windows equivalents are no longer in use.

Posted at 03:13 PM in Travelogues | Permalink

A boatload of new EeePC models have been unveiled by Asus, with 8.9" and 10" screens. Other manufacturers are starting to offer similar products: Acer Aspire One, MSI Wind... Personnally I'm waiting for Dell's offering, called simply "E", due this August.