John Sprung asks a number of questions in the comments section of this blog:

RG: I deliberately bought the smallest one, because (1) it was the cheapest; and (2) I got burned when I bought a 12" HP tablet pc last year. I thought a 12" would be much smaller than a 15", but difference is less than an inch. The Asus 4G is half the size and weight of that "small" HP. It feels like a paperback book.

Here is a photo of the ASUS laying on top of the HP: it is literally half the size: 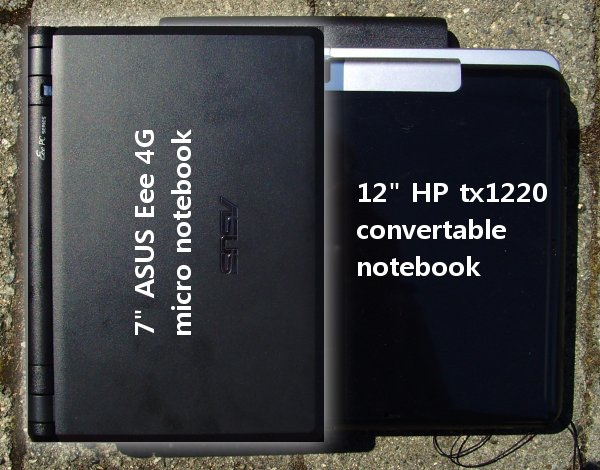 (I have Bluetooth on the HP, and found it mostly useless; I only use it with a Bluetooth mouse to avoid the wireless dongle.)

For extra storage, I bought a 16GB USB key at Walmart yesterday for $70. (Walmart can sometimes carry some really interesting/different electronics items from the usual "safe" fare at FutureShop/Staples/London Drugs.)

JS: I'm in the process of installing both Ubuntu-Eee and WinXP on SD cards so I can switch form one system to another as needed.

JS: I'm using it for e-mail, surfing, and reading e-books. I don't intend to do AutoCAD or other design related work on it -- for now. I may use it for updating various web sites, and later blogs as well.

RG: Same here. I plan to use it on my business trips to access email, Web, live-blog events, and send my ebooks to people who order them. I think the Firefox-Google revolution really hasn't been felt yet.

My 4G works well with my data projector for showing family photos; much less cumbersome than hooking up the HP tablet pc. Also works as a media server.

JS: Have you considered moving away from the default Linux to either the advanced desktop, or to another version like Madevia or Ubunbtu?

RG: No. There is so little free space on the 4GB SSD (around 800MB) that I have decided not to mess around with it.

I would move my desktop to Linux, however, if I were no longer writing about CAD. All of my software is non-Microsoft, so leaving Windows would be a no-brainer.

I should add that I haven't been this excited over a new technology product since I bought my first digital camera in 1999!