Autodesk showed AutoCAD v2.5 in June 1986 at the AEC Systems show in Chicago. I have Autodesk's brochure from back then, and it's interesting to read what was considered "new" in 22 years ago:

-- AutoCAD had more than 50,000 users.
-- Autodesk recommended 640KB RAM, but this release of AutoCAD also had Expanded/Extended Memory Support for computers running the then very expensive 80286 CPU.
-- regen-free zooms and pans.

You can see the list of new commands in the figure below. Autodesk cheated by making the ellipses from short polyline segments. Real ellipses would come later. Still, you can see why v2.5 was such a hit, because these basic commands had been missing 'til then. 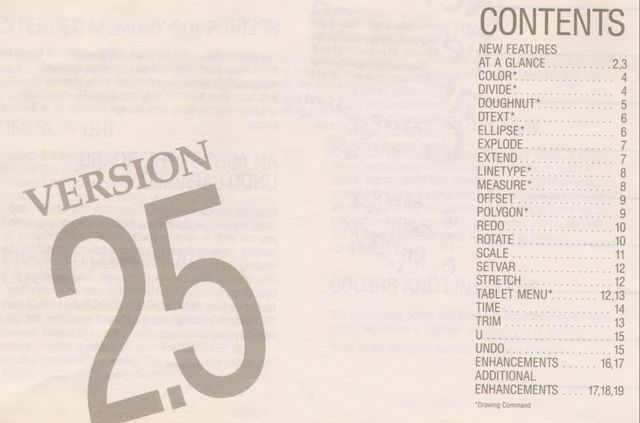 (There is one typo: Table Menu is asterisked as a drawing command; it actually refers to the addition of a tablet overlay included in the box, which killed a number of small third-party developers who had been creating custom templates.)

As well, there were enhancements, such as these:

But not all new features have remained to this day. IGES im/export was later removed. As was the much disliked hardware lock (withdrawn a few months later with v2.52). Autodesk spun the unwanted addition this way:

AutoCAD 2.5 is execution-protected with a hardware lock. There are no power wires to trip over or take up outlet space; the hardware lock simply connects between your pointing device and computer.

At the time, Autodesk had hired a new marketing guy from IBM. As I recall the story, CADalyst (the only magazine dedicated to AutoCAD software at the time) could get a review copy of AutoCAD v2.5 with a 90-day invoice. After 90 days, we could return the software, or pay $2,500 (I think that was the price). Fortunately, saner heads prevailed: the new marketing guy was let go, and the 90-day invoice torn up.

"As was the much disliked hardware lock (withdrawn a few months later with v2.52)"
For some but not all: many user liked the H/Lock and 'the dongle' remained in Australia and other markets right up to V2000, Not every user disliked them and some still have them; when they did go so many disliked the new "software lock" Autodesk were forced, in many cases, to re-issue Hardware Locked versions.
What followed then from the CAD bureaucracy,lunacy,customers had to fill out a form and submit it to Autodesk requesting permission from Autodesk before they were allowed to purchase a hardware locked version. It was a marketing person that had to be convinced and give the approval and many a customer was upset by that process and the person.
If it wasn't so serious, time consuming and costly you would have thought it a comedians stage act: that poor attitude to customer relations is still reflected in Autodesk's actions in the market place to this very day!
R.Paul Waddington.

Thanks goodness they made the change for regens during zooming and panning. I waited uncalulated hours waiting for my Tandy 1000 without a math coprocessor to finish regenerating views. In fact, my version 1.03 just finished regenerating a drawing panned in 1983!

On another note, if any of you still have drawings created in version 2.5, you can still open and edit them using progeCAD 2008 Professional IntelliCAD!

AutoCAD Version 2.5 was a really, really good release, possibly the best ever when compared with what went before. If you look at some of the things you couldn't do with 2.1x, the improvement was dramatic.

Try to imagine using 2.1x: as well as every zoom and pan taking an age, it wouldn't let you plot to a file, mirror at an angle, copy objects more than once, trim objects, stretch objects or explode blocks and plines. No ellipses, even pseudo ones; isometric circles required the creation of a circle block that could be inserted with unequal scale factors. You couldn't even rotate objects without first making them into a block and inserting it at an angle. Version 2.5 also made some important improvements to AutoLISP.

In those simpler days, it was possible to produce a new release of AutoCAD in about a year where the features were actually finished. Finished, working, documented and with API support. Ah, nostalgia.

The hardware lock wasn't a 2.5 deal-breaker here in Australia. The dongle, as it was almost universally known, was with us before then and remained with us until 2000i replaced it with the even less convenient software lock.