« Too Amusing to Not Comment On | Main | TIPS: Adorable Toolbars »

The Museum Called Canada: 25 Rooms of Wonder
by Charlotte Gray 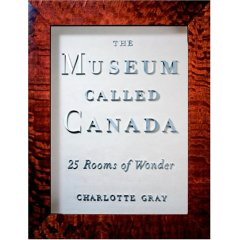 Canada isn't as renown for its museums as are other countries. Before I flew my family to Washington DC, my wife demanded, "This better be worth it!" After three days in the Smithsonians, the demand changed: "When do we get to come back?" And we were not alone. The capital city was inundated by school groups from around the USA.

Here in Canada, we tend to visit the local museums in the small centers. The big ones in the capital city of Ottawa just aren't a destination. I'm not sure why; it just isn't. Families rather fly to Disneyland.

To alleviate the problem, Saran Angel conceived a book to bring the museum to the family. "The Museum Called Canada" pretends to be 25 rooms of Canadian history, lavishly illustrated with photographs of artifacts from many museums throughout Canada.

As such, the book gives a snapshot of Canadian history, from the pre-historic to the fairly recent. Given its 818 pages, you would think it were comprehensive. But with roughly just one (as most two) photos per page, I got left wanting more. But then, I suppose that is better than being so overwhelmed with content that I feel numb and disinterested -- such as reading (working!) my way through The New Yorker's mammoth volume that contains all cartoons they every published.

One solution might be to have 25 volumes, instead of one volume with 25 rooms. But who would buy such an ecyclopaedic effort and its associated price tag?

Charlotte Gray was employed to write an essay for each room. Sometimes her writing helps me gain an appreciation for the era; other times, her speculation leaves me shaking my head, specially when she uses the phrase, "must have," a strong indication of guessing. I'm just not that much into guessing. Her sentence constructs tend to have the leftwing tinge common to Canadian writing, such as sympathy for the bruised protestor.

In the end, I am not sure that this book was written for Canadians. We know too much of our history that is missing from this volume. It is best for those living outside our country, whose heads tend to be filled with myths of seal clubbing and "Who's your president-- er, prime minister?" (Stephen Harper) and "Your currency is American, right?" (no) and "It must be cold where you live." (one week of snow in winter). Certainly, Americans might be interested in a different point of view on the War of 1812.

As I explain to my kids, foreigners tend to be as aware of Canada as we are of Guatemala -- vaguely aware of where its located, and that's about it. Perhaps this book can help turn up the meter on the awareness dial.

In hardcover for $19.50 from Amazon.com; also available used. The Museum Called Canada

Posted at 01:38 PM in Reviews of Books | Permalink