Game Misconduct: Alan Eagleson and the Corruption of Hockey
by Russ Conway 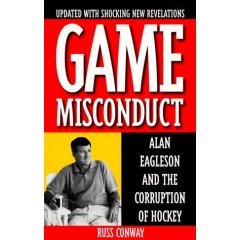 When my wife and I watch Deutsche Welle television over the Internet, we chuckle each time the news reader announces the sports report, for inevitable it begins with the words, "Today in football [soccer] action..." In Germany, sports means soccer; in Canada, we are just as one-dimensional: sports means hockey.

Russ Conway was puzzled when former hockey greats mentioned to him how difficult it was to live on their small pensions. The medical bills in particular were hard to pay; their bodies had been damaged by the game they loved. Why were these heroes not financially cared for in their retirement years?

Mr Conway was the sport reporter for a small newspaper in America -- the Eagle Tribune of Lawrence MA -- and so he was ignored when he began to investigate the Curious Case of the Tiny Pensions. As he asked questions, he was blocked; when he questioned the status pro, he was told to stop -- by his fellow reporters. They loved "The Eagle," because Mr Eagleson could do no wrong.

I recall listening to sports radio at the time, where commentators agreed with each other that they knew The Eagle, he was a great guy, and they sounded embarassed by Conway's accusations. The problem, I suspect, is that sports reporters (1) have a pack mentality, which is revealed by the same (aka safe) questions they ask after every game; (2) are living with their heros; and (3) have no experience in confronting ethical issues.

But beyond the backslapping and handouts, there was a dark side to this hockey super-agent. It is told as an early story, when the young Mr Eagleson had a paper route. If you deliver my papers for me, he told a pair of naifs, I'll buy you a treat at the coffee shop. The naive boys did the work; the crafty Allan never showed. This childhood story became the template for Mr Eagleson's future dealings. Hockey stars agreed to do the work; The Eagle kept their rewards to himself, even when it came to long-term disability payments owed to players.

The most famous hockey series serves an another illustration. The purpose of the Canada-Russia series in 1970 was to boost the pensions of participating hockey players. Revenue was to come from ticket sales, tv rights, and advertising on the boards of the hockey rinks. But the profits went largely into the pocket of Mr Eagleson; the players received almost nothing. Perhaps he got his cues from the entertainment industry; record companies manage to bill expenses to musicians with amounts approaching their royalties.

In public, he said, "Everyone who knows me knows I'm careful with not only my money but with my clients' money and with the association money." In three years, he or his companies earned 1.85 million, at a time when a new player netted $40,000 a year from having Eaglson as his agent. A typical tactic: rent six parking places to Hockey Canada, and another four to the hockey players union -- in parking lot that held only four cars, and at a 33% premium over other nearby lots. It's illegal in Toronto, but he got away with it.

Eventually, Mr Conway's series of investigative articles began to catch the public's attention, as previously cowed hockey stars began to speak up. Even then, most other hockey reporters were keen to stay in the good graces of Mr Eaglson, and his largess (paid by fees charged to hockey players), and his carefully controlled access to hockey news.

While Canadian officials blocked or ignored Mr Conway's findings, the Americans did not. Mr Eagleson was eventually charged with racketeering and violating US labor law. Later, the Canadians also charged him with theft of funds.

Mr Conway's book on how Alan Eagleson smilingly ripped off hockey players is as important a book as Bernstein and Woodward's, "All the President's Men". The difference? Americans don't care about hockey, even though this is largely an American story. One big difference: the sports media was complicit with Eagleson, unlike the Nixon saga. This book is a useful reminder that when "everyone agrees on the facts," the facts may be myths.

Available in softcover for $1.00 from Amazon.com. For more information or to puchase: Game Misconduct

Posted at 12:22 PM in Reviews of Books | Permalink