The Essential Reader: The Case for Freedom

The Case for Freedom: The Power of Freedom to Overcome Tyranny & Terror
by Natan Sharansky with Ron Dermer 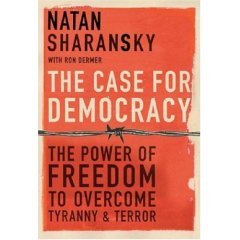 I initially picked up this book from Chapters (the Canadian equivalent of Borders), because it was $2 on the discount pile. But when I got to reading it, I found it very well written.

Natan Sharansky makes one point over and over: only when democracy rules in a country are its people truly free. His reasoning is:

In a democracy, the leaders rule at the whim of the people. To return to power every 4-6 years, popularly-elected leaders need to cater to the electorate. The best way to do that is to ensure the freedom, prosperity, and security of the nation. In short, prime ministers and presidents bribe their own people with kindness.

In contrast, dictators are answerable to no one, and fear loss of power. Thus they enslave the people through psychological and physical warfare. All power and wealth is consumed by the dictators' need to stay in power. In addition, dictators paint other countries as the enemy in order to shift the focus away from themselves. In short, dictators are at war with their own people.

(Naturally, it easy to find exceptions, such as when elections are "stolen," a cry we hear often these days.) But, in general, democratic countries don't declare war on other democratic countries. Mr Sharansky insists that world peace is achievable if every country were to become democratic.

The book is also part biography. He describes his times in the terrible Soviet gulag. The hard work of his wife in getting the Communist government to allow him to be the first to emigrate to Israel. The surprising snake in the garden of Israel. The frustrations of repeated "peace" deals with Palestinians.

For example, he was shocked at the politicism within the Israeli population. If you were not in favor of something, you were seen as against it -- no neutral positions permitted. After he was allowed to leave Russia, Mr Sharansky arrived in his garden of Eden (Israel), and then went into politics solely to assist Jewish emigration out of despotic countries. Because he held no view for or against negotiations with Palestinians, he was branded as pro-Palestinian and anti-Israeli. It shook him to his core that this attitude would prevail in an democratic country -- the serpent in his Eden.

The last third of the book becomes a bit repetitive as he writes about Helsinki, Oslo, and other repated attempts to find peace with the unpeaceful neighbours. He was involved in some of these events; for others, he was a spectator. He details some of the shams that took place. He expresses his frustration at giving the PLO billions in aid in exchange for a promise of peace in the future. He feels that peace would be achieved if the Palestinian government were expected to first implement peace, and then receive the benefits from peace.

Available in hardcover for $26.95 from Amazon.com.Click the link for more information: The Case for Freedom

Posted at 01:46 PM in Reviews of Books | Permalink