There have been plenty'o complaints over Apple's repeated attempts to install its Safari-brand Web browser onto computers that run that competing operating system, Windows. Cf. fig. below. 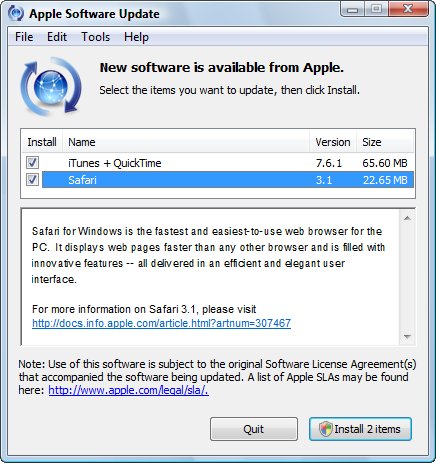 Here are the problems with the dialog box:

Select the items you want to update
- I can't select them, because Apple has already done that for me. I can only unselect.
- Safari cannot be updated, for it was never installed on this computer.

Safari for Windows is the ... easiest to use web browser
- I had installed it on another computer, and found it non-intuitive -- not easy to use. But then I find the same for Apple's other sofware for Windows, QuickTime and iTunes. My daughter frequently calls me over to her computer to help her figure out things as (should be) simple as copying songs from her old computer onto the new one. (iTunes just wants to create links, not the song files.)

Use of this software is subject to the original Software License Agreement(s) that accompanied the software being udpated.
- Since Safari was never installed on this computer, there is no original SLA to govern my use of it. For me, Safari is license-free.

Now there are some Microsoft apologists who claim Apple could learn a lesson from the convicted monopolist on how to push updates properly. Being apologists (or evangelists, or whichever religious term you prefer), they forget about how Microsoft without permission installed software onto individual's computers last year -- including mine.