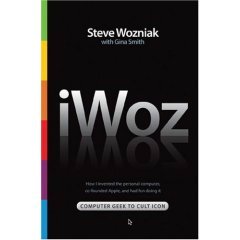 The "Woz" tells how he invented the personal computer, co-founded Apple Computer, and had fun doing it. I was fortunate to hear Steve Wozniak in person at last year's SolidWorks event. It was fascinating to hear him describe his life story in condensed fashion. Clearly, he uses the same script each time he is paid to give the talk, but hearing this lively pioneer of our industry is a bonus.

And the book is the expanded version of his stock talk. We learn about him growing up in geek heaven -- the military technology corporations that were the forerunners of today's Silicon Valley. Working for HP and being very hesitant about quitting to work full-time with Steve Jobs on making and selling the Apple I and II -- the very first computer personal enough for "anyone" to buy it.

I am unsure if anyone has diagnosed Mr Wozniak: his excessive love of jokes combined with his desire to work intensely on his own makes for an interesting character. (While at the University of Colorado, he wrote a program that kicked the paper out every printer on campus.) It leads to perfectionism, such as the impossible compact diskette electronics he came up with, as well as multiple divorces and marriages.

This is one of those important books for better understanding the history of personal computers and Silicon Valley. But the writing style can become tiring at time. Here's a sample: "But I did it, and I did it well. If I am going to do something, I always try to do it well." It would have been great if ghost author Gina Smith had edited out some of those "I"s.

In hardcover for $17.13 from Amazon.com; also available used. Click for more information about iWoz: From Computer Geek to Cult Icon: How I Invented the Personal Computer, Co-Founded Apple, and Had Fun Doing It

Posted at 12:26 PM in Reviews of Books | Permalink