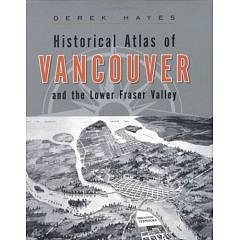 I love maps, especially old ones, and I am not sure why. It may have to do with my need to see the big picture; I did lousy in school when teachers began with details and worked their way out. Maps provide the big picture, and old maps put the world in an even bigger picture of historical context.

Thus I was very excited to see a historical atlas of Vancouver (Canada) and the lower Fraser Valley (where I live). Unlike other ancient map books that simply throw together a hundred pages of scanned in maps, this book is a beautiful labour of love. Each two-page spread has old maps, descriptive text, and -- as the bonus -- scans of historical artifacts.

For instance, "A Streetcar System" has color and black-white streetcar route maps from the 1920s, photo of a 1929 streetcar, and a reproduction of cover of a 1907 promotional brochure. The 300-mile system was ripped out in the 1950s, and one hundred years later, there is talk of reusing the old trackbeds to again extend transit into the lower Fraser Valley.

Of particular interest to me are the early days of my current home town, as well as "Reclaiming Sumas Lake." This shallow, mosquito-ravaged lake was drained in 1923 to reuse the lakebed for 25 thousand acres of farmland. The position of the lake influenced surveys of the earlier railroads, which travel at an odd angle to other geography in the area, such as the mighty Fraser River, Sumas Mountain, and the border with the United States -- which, inturn, affects the locations of services today. All because of a lake that no longer exists.

And that's what I like about history: it helps explain "Why?"

History also puts things in perspective. Today, we travel between Abbotsford and Chilliwack by freeway in 20 minutes; in 1910, a driver set a record by driving the distance in 130 minutes. Another driver that year was fined $10 for speeding at 12mph.

Even more perspective is gained from the many dream plans included in this book, the maps and plans of real estate developers who imagined great things for their newly purchased properties -- whether industrial sites, massive housing developments, or secondary airports. All of which either failed, or are quite unimportant today.

This helps us remember that today's enthusiastic excitement can be tomorrow's failure.

The book is exhaustive, but wonderfully so. Naturally, it will be of interest to those familiar with this beautiful part of Canada, but also to those who enjoy history -- a thoroughly illustrated history.

In large-format paperback for $26.50 from Amazon.ca; also available used.
Click for more information about Historical Atlas of Vancouver and the Lower Fraser Valley [amazon.ca]

Posted at 12:12 PM in Reviews of Books | Permalink