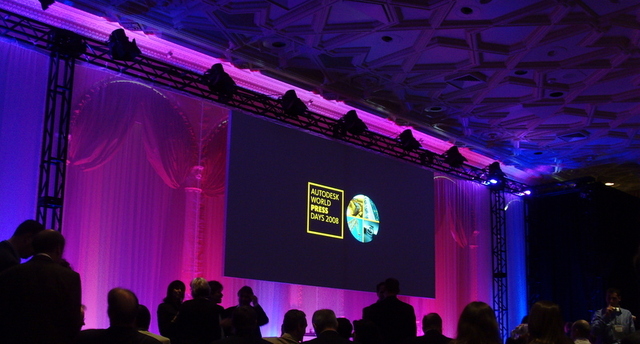 The mainstage in the Peacock Room of the Intercontinental Hotel.

The 2009 UI is not so unified after all. After hearing about the unified user interface (ie, the Microsoft Office-inspired ribbon) in Autodesk's 2009 line of software, a closer looks shows that not all products have it.

Design Review, fer instance. And the Inventor we've been seeing it lacks it too -- just turned off, perhaps?

Those programs with the ribbon, such as AutoCAD 2009, can turn it off, going back to the familiar toolbars, menus, dashboard... Yes, the Ribbon replaces the Dashboard.

So what does LT lack? It doesn't get the following new features found in AutoCAD 2009:

But I did see something new in AutoCAD 2009 that hasn't made it into the press releases. A new form of animation called ShowMotion. Instead of define a path (as with the AniPath command currently), you use the View command to define views. ShowMotion then interpolates the motion path, smoothly moving from named view to named view -- pausing at each one.

It appears that a preview window pops up that strings out the named views, so that you can jump between views. Ideal for showing the client the new house: "Move the bus out of the way!"

...was named after the cross street at which Carol would first stop on her way to work. 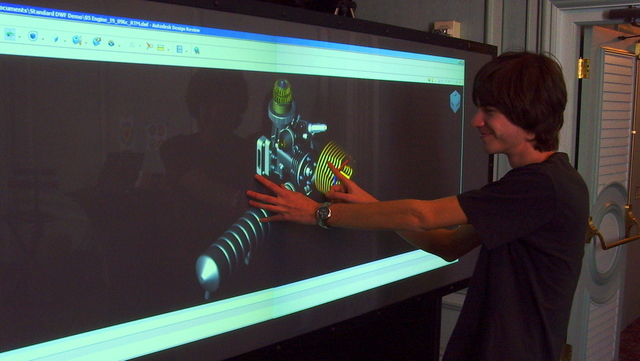 Stefan tries out the giant multi-touch screen at the Autodesk Labs room.Yes, the screen is t-h-a-t wide!

Posted at 03:45 PM in Travelogues | Permalink

Hmmm. Does this imply that AutoCAD 2009 subscribers get Impression free?