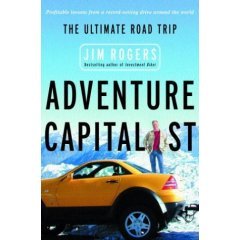 The ultimate road trip this was, as Jim Rogers and his new wife Piage drive spend three years driving through 116 countries -- as well as fly or barge, as necessary. The total would have been higher, but there were a couple of countries that would not let them in, such as Iran. And no stop in Antarctic.

They were fortunate in having Mercedes-Benz custom make their vehicle for them: a bright yellow SLK built onto the chassis of the G-500 SUV. On his previous around the world trip on motorcycle, Mr Rogers found (1) diesel fuel is universal, and (2) every country has a Mercedes dealer, due to the love that dictators have for the vehicle. The idea was to create such a unique and highly visible vehicle --yet one that could be repaired and fueled anywhere -- that the couple would have an easier time getting through countries. In just about all cases, the tactic worked.

The book is an enjoyable read as a travel adventure book. I learned a little bit about 116 countries. But the book falls down in its tag-lined promise: "Profitable lessons from a record-setting drive around the world." Mr Rogers is a global investor, and I hoped to get some investment lessons from him. No such luck: the best he could come up with was, "Buy low, sell high; but don't immediately buy something else after selling."

Towards the end of the book -- about half way up South America -- it seems that he is getting tired of writing. There are fewer exciting stories, more lists of cities driven through. The second largest country in the world is reduced to a single page -- and half of that is about the Alaska highway. Canada was his last country before returning home to the USA.

By the end of the book, he admits that the number of disinvestments equaled the number of investments. Repeatedly, he is disappointed at what he hoped would be a newly developing country with ground floor investment opportunities.

So, don't read this book for investment advice, read it for the adventure. (His most recent book, published last year, is A Bull in China.)

Now in paperback for $10.17 from Amazon.com; also available as a downloadable audio book.
Click for more information about Adventure Capitalist

Posted at 01:15 PM in Reviews of Books | Permalink