« Changing the Guard | Main | BlueTooth is a Single Tasker »

The Essential Reader: The Company

The Company: A Short History of a Revolutionary Idea
by John Micklethwait and Adrian Woolridge 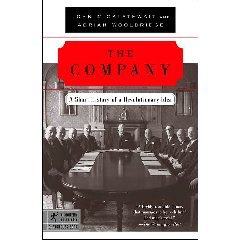 This is a small hardcover book that briskly took me through the history of the corporation. The idea is that investors pool their money, hire a manager to employ the money, and then enjoy the profit. The concept goes back to Babylonian times, but not until the 1700s do the British add a twist: that those who invest the money should not be liable beyond the amounts they invested. The practical outcome was that you could loose all your investment funds, but not your house.

Despite being a short book, the two authors thoroughly describe the slow development of the corporation -- as more rights were granted it, and as it became easier to incorporate. In some countries are artificial persons, who have rights and obligations, can be sued, and pay taxes.

The authors are even-handed, both praising the largess and condemning the greed of corporations. Corporations tend to be ahead of governments in providing workers with benefits, such as health plans and pensions. But Enron-like greed can be just as likely.

The oldest corporation in the world is/was the Hudson's Bay Company, now a chain of department stores in Canada owned by an American private investment house. (Mr Micklethwait is also the author of The Right Nation: Why America is Different.)

Now in paperback for $10.17 from Amazon.com; also available used.
Click for more information about The Company

Posted at 12:15 PM in Reviews of Books | Permalink

It might have been interesting to include the age of the Hudson's Bay Company to give an idea of just how old it is; it was incorporated 2nd May 1670, which makes it 100 years older than the United States. Not bad for a Canadian company.