Or maybe I should've named this post, "Just Try and Copy This."

I have Bricscad Pro running on my Vista notebook, and decided to installed Bricsad Classic on my wife's new Vista PC. All I needed to do was copy the 38MB download file from my computer to hers over the network. No can do.

First time I tried, I realized I hadn't set up her computer's C: drive for sharing. Did that.

Used two copies of Windows to drag the .exe file from mine to her computer again. Same error msg, about not being allowed to.

Fiddled some more on her computer, trying to figure out why a shared drive could not be accessed over the network. Never did.

Both are running the Home version of Vista, and I would assume the security precautions of home computers would be much lower than for office computers. For one, my wife and I want to share files -- no badies around here. But Vista won't let us, because Microsoft knows better than its customers.

Okay, get out the 1GB USB key (memory stick, thumb drive). As I drag the .exe file from one Windows Explorer to the other, I brush by My Sharing Folders. A dialog box curtly informs me that I am not permitted use the My Sharing Folders until I activate Microsoft Something-or-Other-Software-Tied-to-Live that I never use. And then it freezes. The OK button on the unwanted dialog box is deactivited. 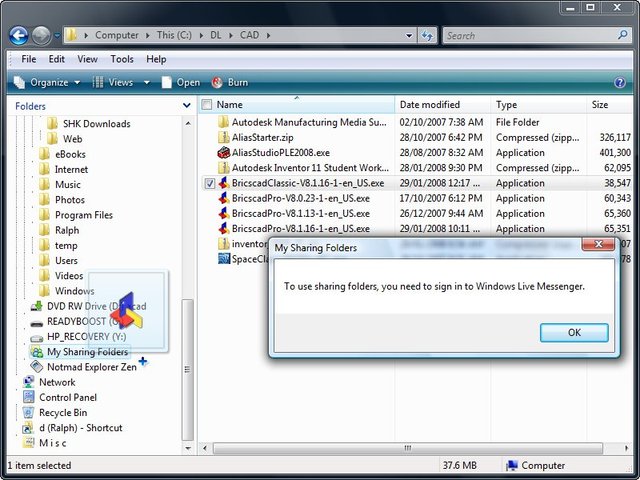 The only way to recover is to perform the following seven-step process:

The worst of it: Microsoft chose to not let us erase My Sharing Folders to rid ourselves of its annoyance. Clearly, the "My" does not refer to Ralph Grabowski.

(I dragged the file a second time over the misnamed My Sharing Folders to see how long it remains disabled. After 3/4-hour, I gave in, and employed the soft reboot method described above.)

Yah, so I dragged the file again, carefully avoiding the time-wasting My Sharing Folders, and then walked the USB key around the desk to my wife's computer.

Why is it that using a network to share files is too insecure for Microsoft to allow family members to do -- but it's perfectly safe to plug in USB keys that contain who-knows-what virii?

Posted at 05:37 PM in Impractical | Permalink