I like poking around big stores, because they sometimes carry electronic goodies at unreasonably low prices. Like the Shark brand Webcam I picked up for $25 from Winners.

Yesterday I came across a $5 item at Wal-mart: Auto-Transfer Cable CA101. It promised to convert CD music into MP3 format and stick it onto your MP3 player. Hmmm, I wondered, how does that work? For $5, I took it home.

The cable has a 3.5mm audio plug at one end (and miniUSB converter), and a fat USB connector at the other. The fat end holds 380KB flashRAM, which holds the encoding software. Plug it into a computer, and it is recognized as a USB storage device. Here's how it works:

1. Plug USB end into computer.
2. Wait for Windows 2000/XP computer to recognize it. It appears in Explorer as two drives: one with the conversion software, and the second (apparently) to access the MP3 device. This second drive is listed as G: in the figure below.
3. Stick music CD into computer's CD drive (has to be drive D: -- this device can't find CD players assigned to other drive letters).
4. Software from this cable pops up, and then accesses the Internet to get the artist and track info.

A dialog box asking you to chose the destination of the MP3 files. 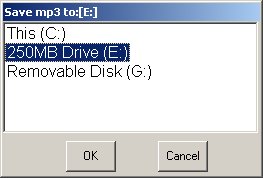 5. Chose the computer's hard drive, or else plug in an MP3 player.
6. Click Convert. There are no options; music is converted at the 128 rate.

Problem is that this cable works only when the music player accepts MP3 files in file transfer mode. My Zen Micro, for instance, requires use of specialized software, and so this cable doesn't work with it.

I had hoped this device might offload MP3 processing from my notebook computer, just like the V-Mate does for converting video tapes into MP4 movie files. But no such luck: the software in the cable is run by the computer sufficiently hard to make the notebook's fan come on.

The benefit is the software is simple (no options, other than where to save the .mp3 files) though not fast: speed is about 8x (it converted a 70 minute CD is just under 9 minutes), compared with my regular ripping software (CDex, free) speed of 14x (same CD converted in just over 5 minutes).

The danger of this sort of device, with its autoloading software and flashRAM, is that it could easily autoload a virus.