Easter Eggs are hidden bits of code designed to surprise and delight you. I sometimes wonder whether messages from Windows fall into the same category.

Your Recharging Computer Needs to Be Recharged

Last year I reported on the warning from Windows that my notebook computer's battery was low, and that it should be plugged in to recharge -- even as Windows also displayed the lightning bolt icon that indicates the battery being recharged (which it was).

This Temporary Change is Permanent

This week I set up my dad's new 17" Toshiba notebook. He still uses dial-up, and to test his Internet connection, I needed to add a "1" to the phone number to call long distance to his ISP (my dad lives in another city). Windows ME Second Edition (err, Vista) asked if this was a temporary change, and I replied Yes.

The next day my dad called to say that he couldn't connect to the Internet. He drove out to bring over the computer, and I quickly found the problem: Windows had retained the "1" as part of the phone number. Vista: Microsoft's best OS yet!

This Fast USB Port Isn't as Fast as Itself

I plugged my Zen Micro MP3 player into my notebook computer today, and came across another Windows Easter egg (er, message). This particular Compaq notebook has three USB ports, all high-speed USB2.

After a while, a yellow balloon appeared (illustrated below), telling me that the "USB device" is a capable of high-speed data transfer. (Would a neophyte user equate "this USB device" with the music player?)

I clicked the balloon see what would happen. Windows XP displayed a helpful dialog box (illustrated below) listing in boldface the USB port it suggests I use instead. 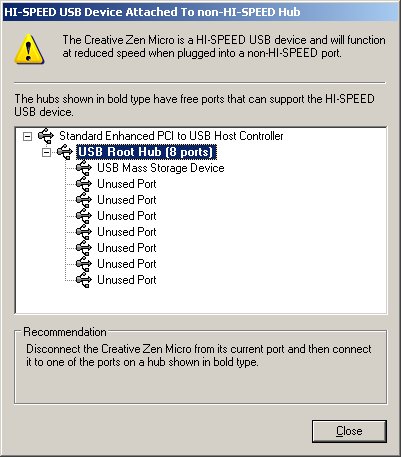 Can you imagine the confusion experienced by neophyte users?

* Windows XP lists 8 USB ports, but the computer has just 3.
* Only one port is shown in use ("USB Mass Storage Device"), but all three USB ports are in use (by a mouse, an external hard drive, and the Zen Micro).
* The port that Microsoft programmers suggest I use is the one highlighted in boldface, the root hub! How do I plug into a root hub?
* The list of ports has a white background, meaning the items are accessible and changeable by the user; but I cannot. It is merely an information list, and should be shown with a gray background (to indicate read-only).
* No online help for this dialog box, except for the handy Close button.

As it turns out, this is a false error message. I had the Zen Micro hooked up to a special USB cable, and I suspect it fooled Windows. Here's egg on them.

Posted at 08:00 AM in The Microsoft Chronicles | Permalink